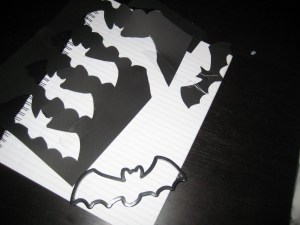 How I love Hallowe’en. During my childhood, it was easily the highlight of the year, second only to Christmas and birthdays (yes, OK, that’s third). Here in the UK, people are still getting the hang of it. There is much sniffiness over the fact that it’s an American import, but no one seems to wonder where the Americans got it from. Well, wonder no more: it’s originally a Celtic feast and very popular in Ireland (where understandably the whole Guy Fawkes thing hasn’t caught on). My boss (who is Canadian) was complaining that the British still don’t understand that you should only go trick-or-treating at the houses that have pumpkins, etc. In Queen’s Park, most houses are now ‘on message’ and I saw lots of groups of children marauding around on Sunday evening. They were all accompanied by parents, which seems sad. We never went out with parents unless we were very tiny. Is the world really more dangerous today, or is it just perceived as such? We also made all our costumes: there was no such thing as a shop-bought costume, and I made countless pointy witch hats out of cereal boxes (what did anyone do before those?)

I spent most of the actual Hallowe’en (Sunday) recovering from my party the night before. I didn’t ask people to dress up, but partly inspired by this fabulous blog I did spend about 3 hours making bats out of black card and suspending them from the ceiling. Our stepladder seems to have disappeared, so my friend L had to help me by sitting on the sofa (as ballast) while I hopped up precariously on the back of said sofa hanging the bats with thread and sellotape. I’d had a glass or two of wine at this stage so I feel quite lucky not to have fallen and broken my neck. I was also going to strew the floor with dead leaves which I’ve seen done before and which looked really cool, but I realised this was too much madness. Sometimes I wonder: am I really 33 or am I just pretending?