TLDR: I had chronic back pain (piriformis syndrome) for nearly two years, caused by writing hunched up in an armchair. I got rid of it through doing at least 20 minutes of Pilates every day for eight months, with particular reference to the suggestions in this article.

This month, though it’s not so great in global terms, is a bit of a miracle for me. January 2017 marks the two-year anniversary of when I first started experiencing chronic, excruciating, can’t-do-anything-except-lie-on-the-floor-with-a-hot-water-bottle back pain. And … drum roll … I’ve now been pain free for about nine months. It’s hard to describe how that feels but it’s a little like this:

If you are, as I once did, googling ‘how to get rid of back pain’ in the middle of the night, you probably don’t want to hear all about how I got it or all the things that didn’t work. So feel free to scroll down to the section on What did work. But if not, sit down, settle in, get a cup of tea and let me tell you ALL about my back pain.

How I got it 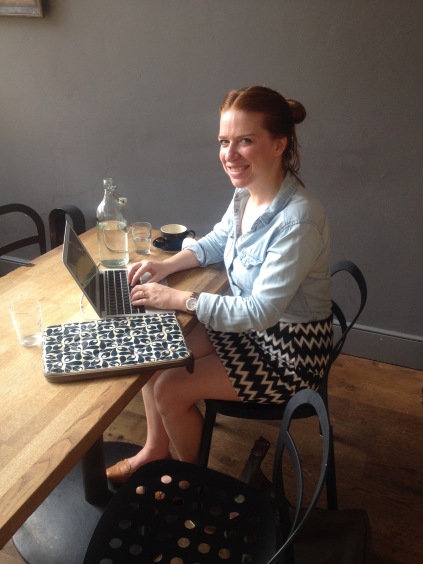 Writing in a cafe. Great for coffee, not so good for back pain

Before 2015, my only real experience of back pain was hearing other people talk about it. Whenever I heard anyone mention it, I said sympathetic things but I privately thought it was surely not such a big deal, and would probably go away if they did ten minutes’ stretching every day. I also thought it was something that only affected really old, unfit people, and would never happen to me. Ha, ha.

I first noticed some twinges over the summer of 2012, when I was writing my second book. I did this on my laptop, curled up for hours on end in an armchair that had as much support as a giant marshmallow. (When I later described to a physiotherapist this method of working, she put her face in her hands).

I stepped up my yoga and the problem seemed to resolve itself, although I did have a couple of quite bad episodes in the summer of 2014 – I remember being at a friend’s wedding and having to go and stretch halfway through the reception. But, again, I went for a swim the next morning and it went away. No big deal.

It was very important to me that it should remain no big deal. I was young and healthy and NOT the kind of person who would ever get back pain, and even if I did, it was nothing that a bit more yoga wouldn’t sort out. There was quite a lot of denial involved at this point, which it turns out is not the best way of dealing with back pain.

In January 2015, I was sitting in a café writing, when the pain in my lower back became so bad that I had to leave. On the way home, I googled chiropractors and made a panicked appointment. Then I texted a friend in caps saying, HOW DID YOU GET RID OF YOUR BACK PAIN? He was horrified that I was seeing a chiro and recommended a physiotherapist instead.  This is an area of big debate among back pain fans – a bit like Oasis versus Blur. My friend was adamant that chiros are quacks. My take, for what it’s worth, is that chiros can be good if you’ve done one dodgy thing to ‘throw’ your back out, but that if it’s a chronic problem that’s taken time to develop, you really should see a physiotherapist.

I cancelled my chiro appointment and instead I saw an excellent physiotherapist (Nicole at Physio Solutions in Angel). She swiftly diagnosed piriformis syndrome: a very common complaint, caused by too much sitting, also associated with running, more prevalent in women, and generally appearing in people in their thirties. Tick, tick, tick. The piriformis touches the sciatic nerve, which means that as well as being literally a pain in the butt it can also radiate down the leg and into the lower back and take over your entire life.

Nicole gave me some simple stretching exercises to do. They were very boring, but I did them. The pain lessened, until by April, it was completely gone.

So what did I do?

I stopped doing the exercises, of course!

Nicole had also strongly suggested I take up Pilates, but I couldn’t find a decent class, and anyway the pain was gone and I was young and healthy and not the kind of person who would ever really get back pain so …  You can guess what happened next.

In May 2015 I went on holiday to Japan. It involved miles of walking every day, which I assumed would be great for my back, so no need to do any stretches. Most of our hotels had hard floors, so stretching was out anyway. During the second week of our holiday, the pain reappeared, so bad that I couldn’t sit for longer than half an hour. 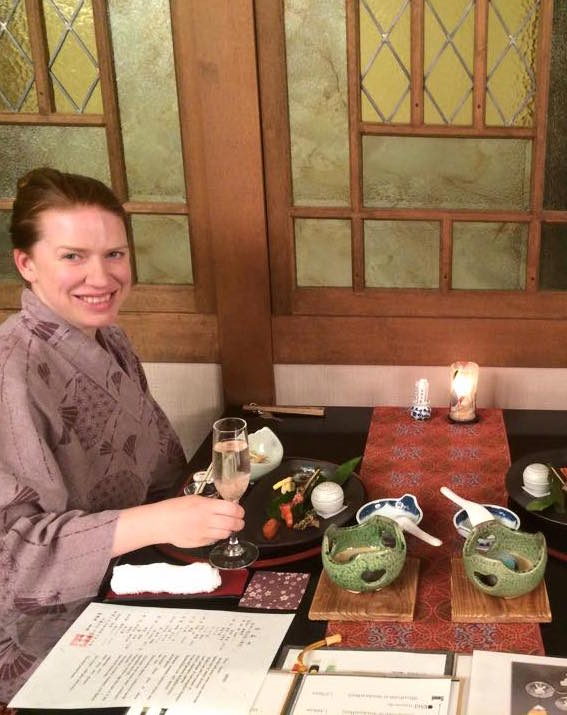 The above picture was taken while we were staying in a traditional onsen, an inn with traditional baths and a sunken bath in our room. We were meant to be having a six-course meal, but I could only stay at the table for three of them. That entire night I spent either in the bath or else curled up on the floor, until I fell asleep from sheer exhaustion. The next day, we made an unscheduled stop on our bullet train to find a pharmacy. There I scored a sweet, sweet drug called Loxoprofen, which is similar to ibuprofen except 1,000 times better. It was hands down the best drug I’ve ever taken. The catch is that it’s only available in Japan, Mexico and Brazil. I can’t tell you how many times, over the next year or so, I wished I had bought more of it. At my lowest point, I googled ways to buy it over the internet, but I stopped myself. I was happy to gulp down paracetamol, but I didn’t really want to be buying contraband prescription drugs over the internet.

As soon as we got home, I went back to the physio with my tail between my legs, and confessed that I had stopped doing the exercises and the pain was back.

‘Did you take up Pilates?’ she asked.

I shook my head. She sighed and gave me some basic Pilates exercises to do. We also looked again at the layout of my desk, and talked about everything from shoes to sleeping position. I was learning that when back pain takes over your life, everything becomes a possible culprit. Like someone who’s just been dumped, you mull endlessly over what you did wrong. As David Mitchell wrote, trying to get rid of back pain is like trying to solve a country house murder mystery, while being slowly murdered in a county house. Around this time, I bought David Mitchell’s book Back Story. I really enjoyed it but I am probably one of the few readers who would have appreciated a bit more detail on his back pain and how he got rid of it.

My study, complete with ergonomic chair

As I continued to go to the physio the pain got slightly better, but it never went away completely. With an injury caused by running or tennis, you can eliminate that activity while you rehab. But piriformis pain is aggravated by sitting, and it’s impossible to eliminate sitting completely and live a normal life, especially when you’re a writer.  (I still can’t quite believe that I still managed to complete two books during this time.) I was also trying to find a good Pilates instructor which, first world problem alert, is surprisingly hard (that’s a whole other post). Essentially, I had ignored the pain for too long that now it had become, not just chronic but savage and seemingly untreatable.

It would be too sad to itemise all the ways in which my back pain affected me. I turned down invitations from friends because I knew that socialising while sitting would aggravate my pain. I had to stop running. I avoided the cinema – one of my favourite things in the world. I still don’t know how the Steve Jobs film ended, because I had to leave halfway through. It wasn’t that bad all the time, but I had at least ten days’ pain out of every month, and sometimes more, which is plenty. During those spells, I was on the maximum dose of paracetamol, and the pain would still wake me up at night and keep me awake for several hours. Back pain was quietly, if not ruling my life, then having a very strong say in it.

I didn’t really tell many people – except my long-suffering husband – because it was boring, and also I was embarrassed. Back pain wasn’t something I wanted to have. Instead, like many people with chronic conditions, I fell down a rabbit hole of YouTube videos, miracle products, gurus and magical cures. I tried the Egoscue method, the Gokhale method, TENS machines, tennis ball massages, myofascial releases, traditional massages and trigger point releases. Most of them contained one helpful element or suggestion. But nothing was a complete cure, and the only thing that really helped was the TENS machine, hot water bottles and baths. Like a stalker or bad boyfriend, my back pain kept on coming back. Until November 2015, when the curve went upwards.

I stopped writing curled in an armchair, obviously. I did my physio exercises, daily. I found a brilliant Pilates instructor online and did at least 20 minutes every day by myself, starting with this video. Once I had the basics I took classes with Tony Watson at the Life Centre who I consider the best Pilates instructor out of the dozen or so that I’ve tried in London. And crucially, during one of my late-night google sessions, I stumbled on this key piece of advice from a physiotherapist based in the States. Her advice was to work the glute muscles harder, in order to decrease pressure on the piriformis. So I worked my buns off. Because I had let the pain get so bad, it took maybe six months of daily exercises before I saw results. But eventually, it worked. I’ve now been pain free since last spring.

If you have back pain, all I can say is: I feel you. I can’t promise that what worked for me will work for you. I would personally suggest seeing a physiotherapist who can show you the Pilates basics, and then seeing a proper Pilates instructor. Start with the video below, if you can’t do anything else – if your problems aren’t too severe, doing it daily might be all you need. You could try reading this post, also by a writer, for some suggestions.

And don’t give up hope. The worst thing about a chronic condition, in my very limited experience, is the fear that it will never go away. With some conditions, that is the case. With others – and I feel very lucky that this applies to me – it will, with patience and persistence, finally become a memory and a lesson to be more careful in future. Good luck!