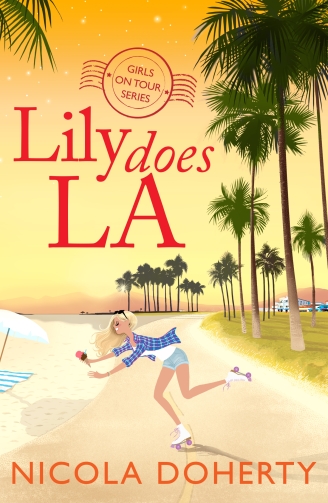 (Shh, don’t tell the others.) Obviously I love all the Girls on Tour equally …. but if I HAD to pick a favourite, it would be Lily. I just love her. I find that there are some characters you have to build from the ground up: by writing lists of their favourite things, and who influenced them growing up, etc. That’s not a bad way, but it’s obviously much more convenient when they pop into your head fully formed. That’s what Lily did. I can’t even remember inventing her – just that one day, there she was, tugging at my sleeve and demanding to be sent to Los Angeles. That’s what Lily does. She sees a thing, she goes after it. I had to do a bit of work on her to make her less ‘ruthless’ but she’s still got plenty of chutzpah. I like that.

The reason for Lily’s trip to LA is because she’s attending, and helping organise, the wedding of her cousin Alice and Sam, from The Out of Office Girl. If you’ve written a romantic story, to get to write the characters’ wedding two years later is just The Best Fun Ever ™ – like writing your own fan fiction. I was also inspired by the hell our own wedding planning. Maybe it was because we did it all in 3 months but we found wedding planning very stressful and I haven’t seen that kind of stress depicted in books and films before. Of course there’s the rom-com cliché of the bride having a meltdown over her chocolate swans not appearing or whatever, but that’s not why weddings are stressful; they’re stressful because they involve your relationship, family, friends, expectations, money, and tons and tons of tiny decisions that are not important really but seem so at the time. So perhaps there was an element of catharsis there. And, it’s set in California which is one of my favourite places ever (see here for more on why I love LA).

Anyway, that’s the story of Lily Does LA. You can read more about it here … I hope you like it!