Just over 2 weeks ago, on a Saturday morning, I went to do a Zumba class in my local sports centre. It was sold out and the woman told me that it was really advisable to turn up an HOUR earlier if you wanted to get in. I went home and went online to look at different exercise classes and dance DVDs. Inspired by a post by the lovely Skinny Latte, I decided to check out the very hardcore 30 Day Shred. It’s basically a very intense, concentrated workout that mixes strength, cardio and abs. You do it for 20 minutes a day, for 30 days, following which you are, in Jillian’s words, totally ‘shredded’ (see below for live example). Or in my case, simultaneously bored and exhausted. 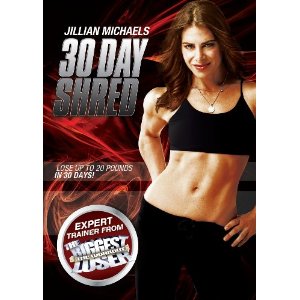 There are 3 levels to it, and the idea is you do Level 1 for about 10 days, then 10 days each on the other 2 levels. I got bored of Level 1 after a few days (*smugface*) and went onto Level 2 where I’ve been ever since. I’m quite bored of that now too but Level 3 is MURDEROUS, so I’m sticking with 2 for at least the next week or so. I’m not shredded yet, but I’ve given up hope of that: my one aim is to finish the damn thing and move onto something else.

Pros: the fact that it’s only 20 minutes a day makes it feel very do-able, but at the same time you really, really feel like you’re getting a workout. It is honestly the most intensive thing I’ve ever done – only Bikram yoga, or finishing a really long run, comes close. You literally have sweat dripping into your eyes afterwards. Jillian has two people (her ‘two best girls’) doing it with her and one (Anita) does a modified version that you can follow if you want ( I mainly stick with the non-modified one, but then I also sometimes take sneaky 5-second breaks, which Jillian doesn’t really like. But she doesn’t know.) Jillian is a good, straightforward motivator, slightly sarky and obviously knows her stuff – judging from the comments on Amazon, lots of people have found the Shred to make miraculous improvements in fitness and tone.

Me? Not so much, and there’s the con. After 15 days of it (spread over 2 and a half weeks … ahem) I’m getting better at it, but I look and feel exactly the same – not an inch or an ounce’s difference. That’s fine, because I don’t really believe in miracle results in 2 weeks … but I am getting very bored of it. Even though I still find the moves tough, I know them all by heart and I know Jillian’s patter too. I didn’t realise when I ordered it that there were only 3 workouts: I thought there would be different ones for the same level and you could mix it up. But no. So I’m really seriously bored but at the same time I’m finding it tough. I went to yoga last night and even though it was just as tough, in places, it felt much more stimulating to be able to use your mind as much as body. Not much scope for that with shredding.

However, on balance I’d say it’s good value for money at £4.99 for unlimited workouts – I’m definitely going to use more DVDs in future. I’ll complete the Shred because I’ve come this far, and I’ll be annoyed with myself if I don’t – but after that I’ll be very happy to wave goodbye to Jillian and her ‘two best girls’, at least for a while.

What about you – any Shredders out there? How are you finding it?