I find myself adopting lots of American slang – in general, but particularly now I’m here. One word though that I will never be able to say with a straight face is ‘awesome’. My friend Sophie who is a native Californian uses it frequently and sincerely and even semi-sings it when things are particularly awesome. I can’t do that, which is a pity because so many things I’m seeing here are AWESOME.

Last night I went to the California Academy of Sciences in Golden Gate Park. It’s a natural history museum crossed with a zoo that also has a Foucault’s pendulum and a planetarium and a living roof and PENGUINS: basically it’s a total awesomarium. It has a rainforest dome. At the top is a canopy with tropical birds and butterflies, and at the bottom is a drowned Amazonian forest where you can walk under a glass tube and see the huge hundred-year-old fishes and a turtle (he is visiting from the San Francisco zoo apparently) and eels swimming through the roots of trees:

It has incredible creatures including a BASILISK – I didn’t think these even existed:

When we reached the top we saw a girl with a butterfly net – her job is to stop butterflies getting in the elevator. Every Thursday they have late night events with drinks and DJs. We went on one of those nights: they had amazing acrobats dressed up as the animals – this woman represents the albino crocodile (yes, they have an albino crocodile, it is seriously creepy): 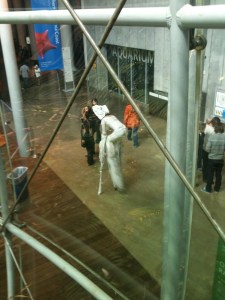 As well as all the usual stuffed animals and whale and dinosaur skeletons, they also have a mini coral reef, an amazing planetarium with a 75-foot domed screen with an awe-inspiring show (narrated by Jodie Foster) where they take you inside a leaf and show you life on other planets (well, water). It is a wonderful wonderful museum and if I lived in SF I’d go there all the time. Awesome!