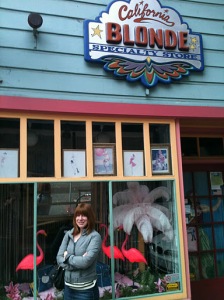 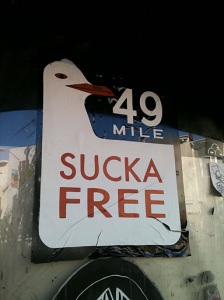 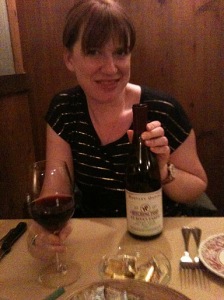 I am writing this sitting in a cafe in San Francisco.

How thrilling is that? I have been in California since September 30th. With A, I spent 2 weeks driving from LA up to San Fran, stopping off along the way to do everything from drinking wine to spotting butterflies to visiting amusement parks. Now A has gone home and I am staying on for 2 weeks in San Francisco to write Book 2 (or some of it. The whole thing might take longer than 2 weeks.)

I found LA far nicer than I expected: laid-back, alternative and artsy. We stayed in the Venice Beach House, a block from the sea (or the ‘ocean’ as they say here).

I arrived a day before A, and on my first day I hired a bike and cycled from Venice to Santa Monica, beside the beach. It was a beautiful sunny day and every odd-bod in the world was out and having fun in the sun.

Then A arrived from Santiago (Chile) after a 20-hour journey. To shake off his jet lag we walked around the Venice canals which are just exquisite and a well-kept secret – we had them almost to ourselves. We didn’t have a camera but you can see pictures here.

On day 2 I got up early and went for a jog beside the Pacific as the sun was coming up. There were surfers in the water and a fashion shoot happening on the beach and I had one of those ‘wow I’m here!’ moments – the first of many. Then we went to pick up our hire car for the trip. We had booked a convertible, but it turned out to have a tiny boot and no GPS, so we got a Toyota Corollla instead. 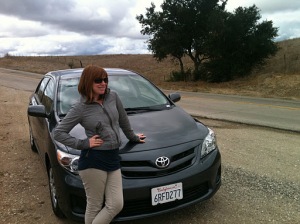 A. very intrepidly drove us around around downtown LA: we saw La Brea Tar Pits, and then Hollywood Boulevard which was amusing and much less tacky than I’d expected. I even ran into a celeb:

Then we set off after dark on a fairly terrifying drive out of LA to Santa Barbara. Our GPS set us on a strange route up into the mountains, up Laurel Canyon and Mulholland Driven. We gave up on the idea of reaching SB before midnight and stayed in a Marriot in glamorous Oxnard – guided by our faithful GPS. How did people do road trips before GPS? We also got a lot of amusement from our GPS which talked like a record being played backwards (‘Embarcaderoooow’) 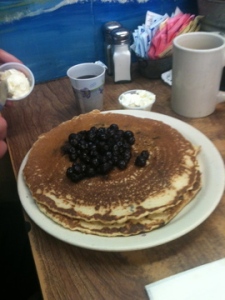 After a totally overwhelmingly huge breakfast at a cult breakfast place called Mrs Olson’s, we drove to Santa Barbara. It is gorgeous. Lush, green palm trees and white colonial-style Spanish buildings – which apparently were a recent innovation after the original town was destroyed in an earthquake. 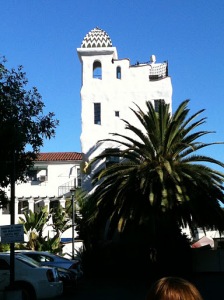 We saw the first of many Missions – the outposts built by the San Franciscan monks who first settled California. We ate lobster and scallops and tasted California wine while watching the sun set over the Pacific. We decided this was not a bad place, all things considered. This was also my first day driving in the States. It was fine! Whew. 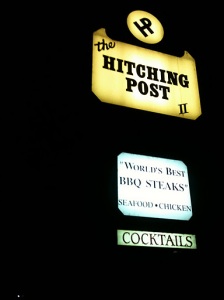 Santa Barbara Wine Country, as seen in the film Sideways. We ate duck (me) and steak (A.) and drank Pinot Noir at the Hitching Post (where Myles eats in the film – it was DELICIOUS) and stayed in the Days Inn in Buellton (more or less because it was the cheapest place around, but it also happened to be where they stayed in the film.) A. started saying ‘We don’t have to do EVERYTHING they do in the film’. We found the Days Inn inexplicably cheap. It also had a sign saying ‘This facility contains traces of chemicals known to cause birth defects’. Which was worrying but then we saw it everywhere in California and realised it’s some kind of uber-cautious state-wide small print. We went to Fess Parker winery and tried on raccoon hats and tasted more wine.

I was surprised at all the wildlife: as well as horses we saw humming-birds and eagles and also – shivers – tarantualas crossing the road very slooowly.

After the rigours of our travels we decided to stay two nights in the aptly named SLO (as locals call San Luis Obispo) It was lovely. We found a very cool cafe and stayed there for almost all day, playing Scrabble. 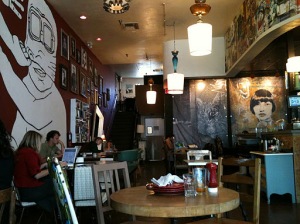 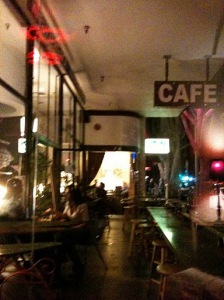 We bought books and went to the cinema (twice) – we saw Contagion and another indie type film whose name I forget. We stayed in an adorable hotel. Everything was super laid back and relaxed. I was struck here, as everywhere in California, at how many independent cafes and restaurants there were: aside from IHops and things on the outskirts, we barely saw any chain restaurants or cafes in any of the towns. Even toy shops had incredibly creative windows: 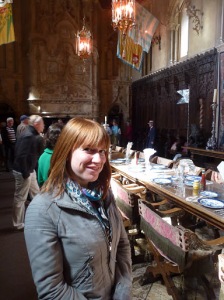 Hearst Castle was amusing and impressive, as gaudy monstrosities go. The tour was a little light on meaty facts about Hearst and his career. We watched a film about him that was pretty cheesy (A. fell asleep halfway through) and mainly just said over and over that he was inspired by his visit to Europe when he was a little boy, to create Hearst Castle. I do treasure our souvenir photo which has us superimposed against a fog-wreathed Hearst Castle. We drove on to Big Sur, listening to NPR like the nerds we are.

I can’t describe Big Sur. Can only post a few photos and say: you have to go. It’s easily one of the most beautiful places I’ve ever been. If you do go, have lunch at Nepenthe. Get a table on the terrace and look down over bluebirds, hummingbirds and the Pacific. Heaven.

Pacific Grove is known as the Butterfly town: it has a big grove of trees that attracts hosts of Monarch butterflies every year. Unfortunately a branch fell in the park and killed an old lady whose family are now suing it. The city had people come in and cut down some of the trees and this damaged the butterfly grove. We didn’t see any evidence of damage and saw quite a few butterflies. PG is an extremely quiet town – we explored it on a Friday night and it was pretty much empty. We also saw Monterey Aquarium, which was amazing (seahorses, a great white shark, and we saw feeding time!) except that the otters were disappointingly slothful.

I wanted to go to Santa Cruz because it was in The Lost Boys. A. was less keen – understandably, never having seen the film. It turned out to be a pretty odd place so we just spent a couple of hours there, hanging out on the boardwalk as sun set:

We had fun on the boardwalk and at its funfair (A made me try a ride that scared me but that I enjoyed) but were less keen on the millions of homeless people and oddbods hanging around. California has an incredibly high number of homeless people, many of whom clearly have mental illness. It’s very sad.

We headed on and spent the night at Berkeley, in the French Hotel. I’m not sure why it’s called French but it had a cafe attached full of what looked like local lefty characters. One woman was reading the Guardian. I was amused to think we’d travelled to the US to find one of the few places where you probably would find someone reading the Grauniad. We also met a man with an inspiring message:

Otherwise, I found Berkeley a tad dull but it was still interesting to explore the campus and see where the student revolution originated. They had a big display outside the main library/cafe area with the day’s front pages of newspapers from all around the world – a very neat idea. We attempted to get into Chez Panisse but it was closed, so we had to go to another wonderful restaurant instead. Hard times. The food in California is universally amazing and all the restaurants place a great emphasis on food being locally produced, naming the variety and farms it comes from, etc. And the wine! Very very nice. Expensive compared to the food, but not really compared to London prices. As a rule, even in the nicest restaurants, a main course that was (say) $22 would probably have been £18 in the UK. And in more casual places, it was generally a lower price in dollars than it would have been in pounds. If you see what I mean. 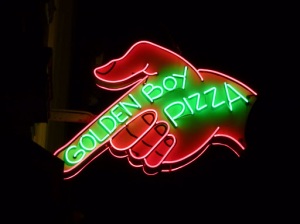 And then we came to San Francisco. I nearly died of fear when driving us to our hotel – driving up HUGE hills where you couldn’t see the top, and then down STEEP hills that were like a black ski slope. I do not know how you would do it with a stick shift We went up Coit Tower. We went to Alcatraz – the tour is really well done with an audio guide narrated by former prisoners and guards. This is a view from Alcatraz – you can see how thick the glass is: 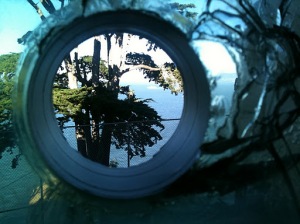 We went to Chinatown. We went to SF Moma and to the Jewish Museum to see an exhibition on Houdini. And then A. left and I stayed here, to write my book and eat and explore my way around the city. Will post more on my adventures here when I can …