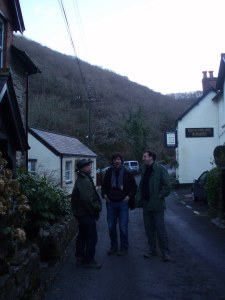 I spent New Year’s Eve in Devon. If you’ve been paying attention you might have noticed that this was my third – yes, THIRD – trip to Devon this year. This was a slightly different location to last time, further west and inland, on the northern edge of the Exmoor National Park, also with different people. It was all pretty idyllic. We were staying in my friend S’s parents’ holiday house. At the back of the house, a terrace overlooks the East Lyn river (literally, you could jump off the terrace into the river, if you were so inclined) and at the front, as you see above, it is diagonally opposite a very good pub which is a mere ten-metre stagger away. That seems a reasonable location to me. (I hasten to add, ours is directly to the left of the guys, with the hydrangeas. Not the tiny bungalow directly opposite. Just so we’re clear.)

We arrived on the 30th; the guys very kindly picked me up from Bristol airport, which was rather luxurious compared to the six-hour train and local bus odyssey I had planned. We went out for big walks each day: on New Year’s Eve, to Lynton and Lymouth; on New Year’s Day, to Countisbury in glorious sunshine, and on the day after, I stayed home while the others walked the Lorna Doone valley. 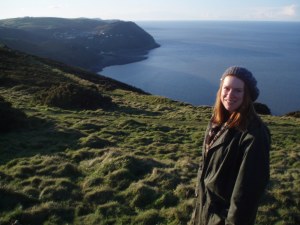 We went to one charming country pub after another; the Blue Ball near Countisbury was particulary gorgeous – it had a boar’s head wearing a hat mounted on the wall, and featured an eccentric local wearing plus-fours who we overheard saying confidently to a young woman at the bar, ‘I could chase you up to the top of that hill.’ He also staggered over to ask us, ‘Don’t you think turkey tastes like industrial waste?’ We agreed with him, whereupon he roared back over to the bar to say, ‘They think your turkey tastes like industrial waste’. Also extremely nice was that for the whole 4 days I did no cooking aside from making a cake. On New Year’s Eve, my new best friend O cooked an amazing beef stew with chorizo and red wine, similar to the one I made in last time in Devon in the same way that a Lamborghini resembles a Mini. We washed this down with amazing white Burgundy and then I think Beaune, courtesy of O’s job in the fine wine investment trade (can you see why he is my new best friend?) 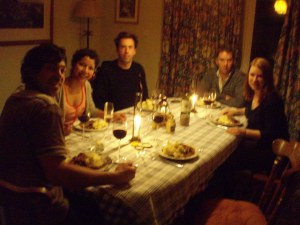 One of the days, I went for a walk by myself up an extremely steep hill on a quest to buy eggs from a farmer – the woman at the pub explained that they can’t use his eggs, though they are organic, because they don’t have the Lion mark. The farmer, when I tracked him down, told me he used to live in the house I was staying in. On my way back down the hill I saw three stags appear at the bottom of the valley, look up and clock me on the horizon, and then melt away back into the woods. I saw wrens, tinier than hen’s eggs, bouncing around in the hedgerows beside me. On our last night we walked home from another beautiful pub (the Stag Hunters in Brendon) by the light of a full moon. It was idyllic. I am spoiled. These weekends away are addictive. Should I move to the country? Or just marry someone with a nice country pile?